Your annual superannuation concessional contributions cap may be relaxed under certain circumstances. Read on to find out.

The first year you will be entitled to carry forward unused amounts is the 2019–20 financial year. Unused amounts are available for a maximum of five years, and after this period will expire.

A definite advantage of this arrangement is that you do not have to cut down on essential expenses to contribute to a super fund if for some reason you face sudden financial distress.

Note: This Table assumes no indexing of general cap.

By now you must have found a satisfactory reply to a common question investors often have – What is a concessional contributions cap? Now it’s time to find out about a different type of cap to super contributions.

From 1 July 2017 your total superannuation balance at the end of the previous financial year will determine:

From 1 July 2017, the bring-forward amount and period is dependent on your total superannuation balance on the day before the financial year contributions that trigger the bring forward. 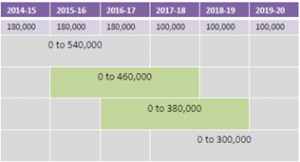 The CGT cap amount is indexed in line with average weekly ordinary time earnings (AWOTE), in increments of $5,000 (rounded down). The new indexed amount is generally available each February.

If you would rather meet a salary sacrifice concessional contributions cap, the final decision would depend on your employer and your age.

What happens if I exceed my concessional contribution cap?

We strongly suggest speaking with your accountant or giving us a call if you believe you have exceeded the contribution cap within a financial year.

Can I put lump sum into super?

Yes, salary sacrifcing is not the only way to inject funds into your super fund. You are also able to make a non concessional lump sum payment from your bank account at anytime. Usually via Bpay.Give us a call and we can step you through the differences between concessional and non concessional payments.